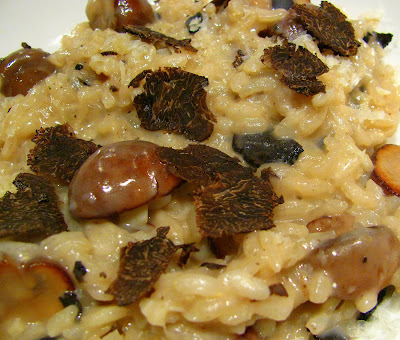 How can you, my readers might ask, be on a budget challenge and have truffle risotto for dinner?

When Dennis sent out the invites for his birthday dinner, he specified that he did not need any gifts – but for people who did not want to come empty handed, he advised ´perishables´: meaning, no stuff that ends up in a closet never to be used/read/listened to, but things that can be enjoyed for a while and then are gone forever.

After all, stuff, we have enough of.

So he ended up with chocolates, some great wines, port, special teas, and whisky.

And this little thing: 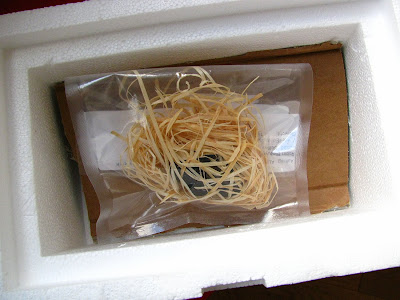 It arrived in a polystyrene box, the kind that´s used to transport donated organs from one hospital to the other – and jokes about Dennis being in need of a new liver abounded. But on opening the lid it wasn´t a bloody body part on ice that he found, but a delicate brown morsel wrapped in straw, packed in plastic, that looked and felt just like a true winter truffle. Which is what it was, shipped all the way to Amsterdam from France, all 19.7 grams of it. 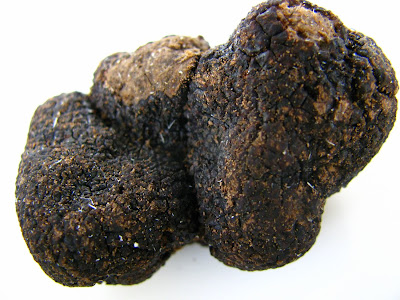 I spent a couple of hours trying to think of creative, original things to do with the truffle, and then decided that with great things, simplicity is always best. I did remember a previous truffle dinner (2 years ago, with a truffle we´d brought back from our vacation in Umbria, which, by the time I got around to cooking with it, tasted of.. absolutely nothing). Ofcourse I had faith in my friends but maybe not in every truffle seller, and even the slightest possibility of a disappointing dinner was too much for me yesterday. So I decided to make a risotto that would be good on its own, and hopefully, sublime with the truffle.

There are plenty of discussions floating around on how to cook with truffles. Some people say they need to be cooked with the rest of the dish to release their full flavour potential, other say they only need to be slightly warmed for optimal aroma, and yet others say that shaving the raw truffle onto the food gives the best result. Because this truffle did not have an overwhelming aroma when I opened the plastic bag, I felt that a little cooking wouldn´t hurt and would help to coax as much truffle flavor out of the 19.7 grams as possible. 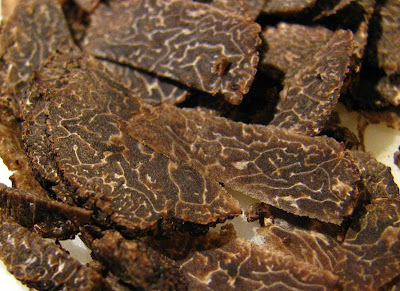 I made a very simple risotto, with white wine and chicken stock and some sauteed chestnut mushrooms for textural contrast. About 2/3 of the truffle was added halfway through cooking the risotto, the rest just at the end (with a good glob of mascarpone for creaminess and richness). I saved a couple of paper thin slices to sprinkle on top, where they kind of melted in the warmth of the rice.

We sat down to a very good dinner. The risotto had musky, earthy, luscious undertones from the truffle, and it was very rich and creamy and delicious. But (and yes you could feel this but coming on didn´t you?) we weren´t blown away. Not the way you would expect to be blown away when you slice up an almost 20 gram truffle between the two of you. And I am sorry to say this, seeing that this was a gift and all, and don´t get me wrong, it was a truly delicious risotto (and would have been much less delicious without the truffle!), but we´re talking about food here people so I have to be really honest.

Truffles can be heavenly, this one was like drifting on a little cloud on your way to heaven.. and finishing your plate just before you get there. I wonder why this is? Is it really only possible to experience truffle-heaven in the country of origin? Although I must say I´ve had some fantastic truffle dishes in Dutch restaurants, too... could it be that it´s restaurant chefs who snag up all the best specimens?

Still, a cloud on its way to heaven... not a bad place to be on a Monday night, in the middle of Budget Challenge.
Posted by Klary Koopmans at 3:27 pm

These black truffles never get as powerful as the whites... I also found the black ones a little disappointing. Somehow their flavor comes out best when you keep it together with some fresh eggs, which absorb the smell of the truffle somehow. In itself, the truffle seems to lack flavor.. :-(