Many years ago, we were lovers. I use the term 'lovers' a bit loosely here. At the time, I did not really know much about love, or passion. But still, we lived together for more than a year. I didn't have much else to do then to try and get to know you. Would you understand it if I said that, right now, I feel like I never really knew you at all?

After walking your streets for days, I am stunned and amazed at how beautiful and lovely you are. Was it always like this? This fascinating combination of the gritty and the refined, the sophisticated and the raw, the old and the new? I don't remember it like that. I remember a city that fought me, that would not give itself up to me. Now I'm beginning to think it was really the other way around, and that I was the one who was fighting.

The second hand bookstore where I used to buy German poetry is still there. The ice cream shop on the corner of my old street is still there, and I'm pretty sure the guy who scooped up my rum chocolate ice cream, is the same guy who worked there 20 years ago. I spent a couple of hours marvelling at how familiar everything seemed. And then I went and did things I never did back then. I went to the beach. I took the ferry. I went out to dinner, all by myself. Around midnight, I sat in a bar and had a beer - all by myself. I went to a cocktailbar with a bunch of people I'd never met before and walked home through the rain at 2 am. I explored neighborhoods I never even knew existed.

I got to know you.

I promise you, it won't be another 20 years before we meet again. 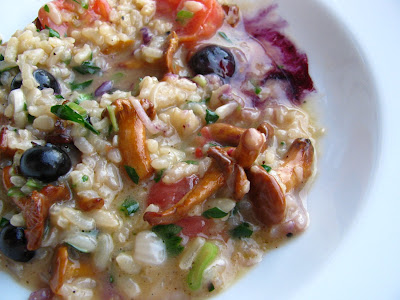 Chanterelle and blueberry risotto at Schauermann 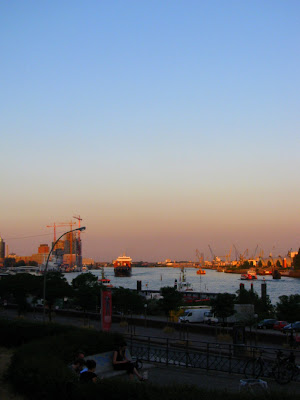 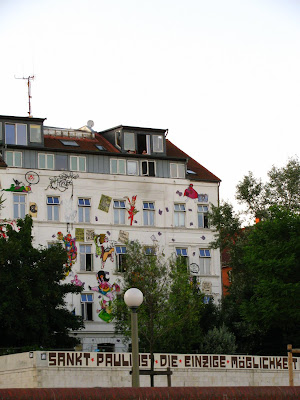 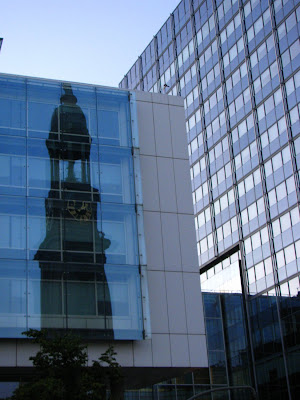 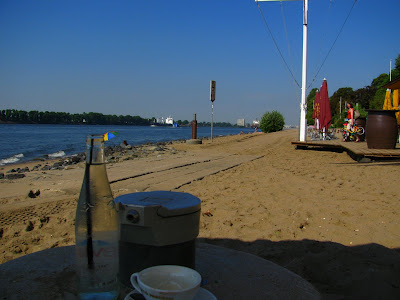 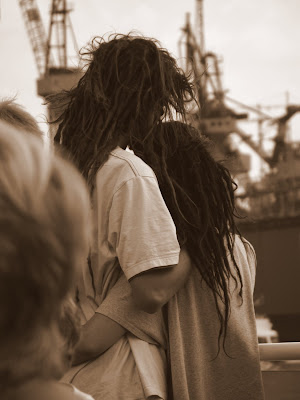 Sweet couple on the ferry 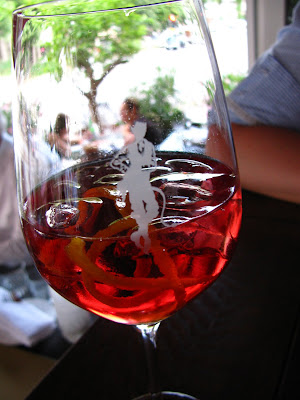 The hip drink of the day in fancy neighborhood Eppendorf: rosé port with tonic and orange zest 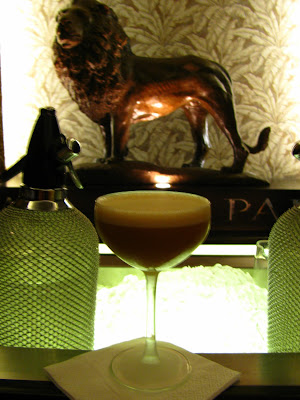 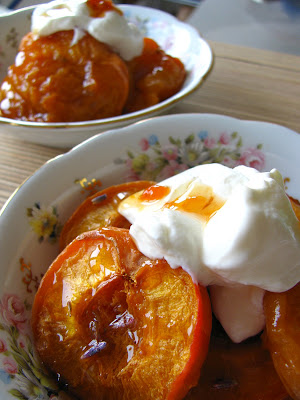 Will you believe me when I say the color of this dessert was unintentional?

It´s about 2 hours before the World Cup Final and Amsterdam is bursting at the seams. The streets are overflowing with people in the most bizarre orange outfits. Until now I managed to ignore the whole thing - did not watch a single game - and really, could not care less about it. Still yesterday we had this orange-toned dinner, so I wonder if maybe subconsciously all that orange is affecting me? 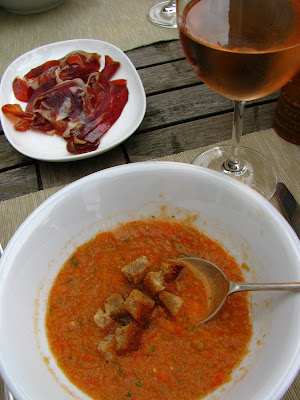 Anyway, these apricots were lovely, and worth repeating on any day, no matter what sports event is on tv and wether you care about these things or not. 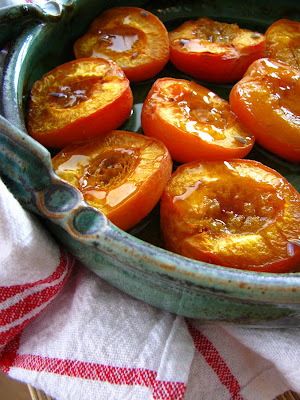 The oven is very kind to hard, woolly apricots that are unfortunately often the only ones we can buy here. I got the idea for roasting them with honey from here, but used a little dried lavender instead of the fresh tarragon. be very careful with the lavender, it can go from being intriguing and delicate to tasting like your grandmothers linen closet very quickly. 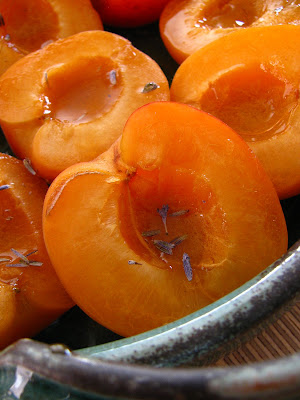 Honey and lavender roasted apricots
a little dessert for 2

Preheat the oven to 200 C.
Mix the honey with the water.
Put the apricots, cut side up, in a small baking dish. Sprinkle over the lavender. Pour the honey syrup over the apricots. Roast for about 30 minutes, or until the apricots are soft and fragrant.

Cool, and serve with a dollop of creme fraiche. (Alternatively, serve warm with vanilla ice cream).
Posted by Klary Koopmans at 6:37 pm 1 comment: 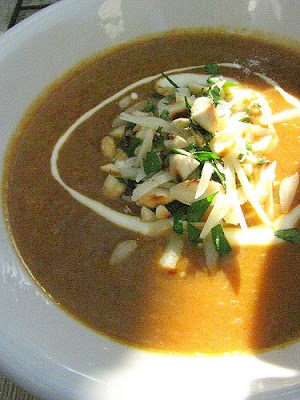 First of all, I apologize for this picture. Something was wrong with my camera settings, which is why this picture looks grainy and dark and gloomy, so very unlike the soup that's in it - which was a glowing vibrant orange-red, and we ate it on a sunny summer evening on our balcony. But it tasted so good, so great actually, that I'm posting the picture and the recipe anyway.

I make a lot of soups, many of them by simply following the 'throw a bunch of stuff in a pot, add water or stock, cook and puree' method. They often turn out good, sometimes great, and sometimes truly wonderful. Yesterday was that kind of soup.. when we were eating it I was already thinking of excuses to make it again, soon.

It was already a great soup after I pureed it, but it was adding the fennel seeds that lifted everything to new heights. They give the soup a complex, very intriguing flavor, so don't skip that step!

I invented the topping because I can't bear a creamy pureed soup without something crunchy to act as a textural contrast. Simple croutons would be just as nice, in which case I would add a sprinkling of parsley as well.

Preheat the grill. Put the peppers skin side up on a baking sheet. Roast them under the hot grill until the skins are blackened and blistered and the flesh of the peppers is soft.

Meanwhile, heat 2 tablespoons of olive oil in a pot. Add the aubergine, shallot and garlic, and a good pinch of salt. Cover the pot and sweat over low heat until the vegetables turn soft and mushy (don't let them brown), about 15 minutes.

When the peppers are ready, put them in a bowl and cover tightly with plastic wrap. Leave to steam for 10 minutes (this will make it easier to slip off the skins).

Add the stock, rosemary, and chili flakes to the aubergine in the pot and bring to the boil. When the peppers have steamed, let them cool a bit, remove the black skins, and chop them coarsely. Add them to the pot. Simmer the soup for 15 minutes, then puree with an immersion blender. Add the fennel seeds and lemon juice and taste for salt and pepper.

Mix the chopped almonds with the parsley and cheese. To serve, swirl a tablespoon of creme fraiche into each serving of soup, then top with a heaping tablespoon of the almond mixture.
Posted by Klary Koopmans at 7:19 pm No comments: