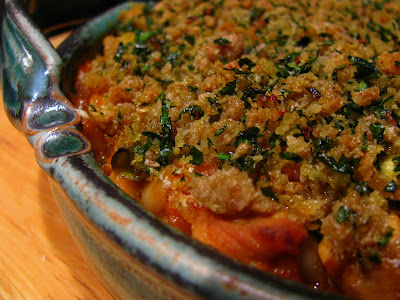 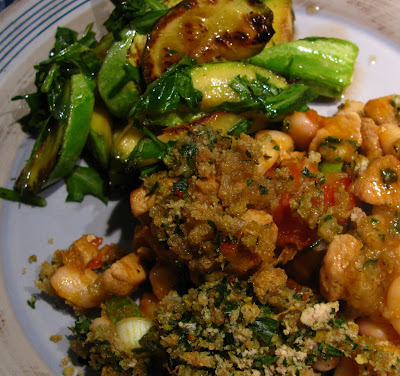 You would think that in that huge pile of pantry clutter, there would have at least been on little bag of dried beans, wouldn´t you? But no. Buckwheat, couscous, barley, spelt, bulgur, split peas and lentils, and no less than 6 types of rice, but no beans. The only incarnation of beans that I could find in the house was a can of rather mushy white beans. Why I ever bought those, I don´t have a clue. But I have to eat them, so why not today?

I had about a pound of organic braising pork, which I cut it up into very small cubes. Half of it was browned with an onion, lots of garlic and a diced large carrot, then simmered with about a third of a can of chopped tomatoes, a cup of white wine, and lots of fresh sage. When the meat was tender I added more sage, some sliced spring onions, and the white beans from the can. 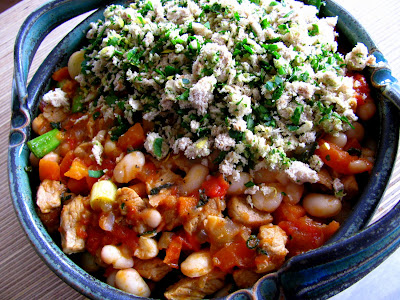 The other half pound of pork was browned with onion, carrots and garlic too, but then simmered with the rest of the tomatoes, oregano, all spice, chile powder and cumin. Then I threw in about a cup of barley and a cup of water, and simmered again, for half an hour or so untill the barley was tender. This pork barley chili concoction will be dinner some time during week. The pork & white bean dish was dinner tonight. 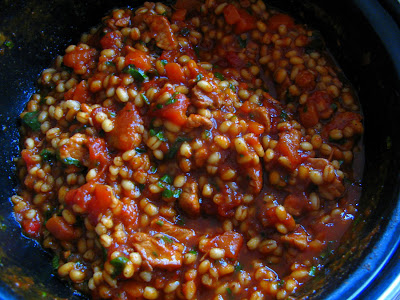 In the interest of frugality, I did a thing I´m very proud of. We usually throw away a pretty big chunk of bread on Sunday night - it´s been around since Friday, we didn´t eat it all, on Monday it will be too old to eat. Today I processed the bread into crumbs (even saving the crusts to feed to the rat), used half of those crumbs, mixed with parsley and lemon zest, to top my pork and bean casserole, and froze the other half.

Now if only I can find a use for those frozen breadcrumbs before they get freezer burn...

The pork & beans were delicious, and because the canned beans were kind of soft and bland, the crunchy, savory breadcrumb topping was a very welcome addition. We had some panfried zucchini, tossed with the remainder of Friday´s buch of rocket, as a side dish. The good news is that there´s a tiny bit of pork left over.. which will make a great lunch tomorrow, when I'm working from home.
Posted by Klary Koopmans at 9:00 pm

What about these tofu balls (scroll down for recipe)?

Sorry, that url didn't come out very well, did it :( Another try:
http://tinyurl.com/cddo5h

Pfffft, I must be getting hungry that I'm so negligent... I'm just trying to help out with those frozen breadcrumbs!

Hope this will be my last correction :\