Comfort me with Barley 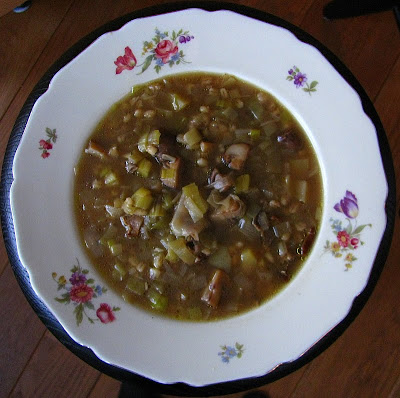 I wonder where this craving for slightly bland, beige-brown, non-spicy, soothing comfort food is coming from. It's been a couple of weeks now, and somehow I don't feel it's gonna change anytime soon. I'm not sick, blue, depressed, or hormonally challenged, or suffering from any other condition that might explain this need. But it's there.

Maybe it's because my life is spicy enough at the moment, even without sambal, chipotles and chorizo?

Here's a soup I made earlier this week. I made it for Dennis, on the night I was going out to dinner with a friend (to Marius, where I had a fabulous meal of pan fried halibut with fennel, beets and basil beurre blanc, partridge with cumin roasted pumpkin, celeriac, fried leeks and mash, a lovely cheese plate, and lemon curd tart to finish). I had a small bowl of the soup in the afternoon and thought it was a wonderful soup, with the silky leeks, nutty mushrooms, little cubes of floury potato, and the slippery chewiness of the pearl barley. Unfortunately Dennis does not really share my love for barley or my current need for blandness, so in retrospect I probably should have made him something else - sorry D.!

I'll make it up to you with something hot and spicy... soon. 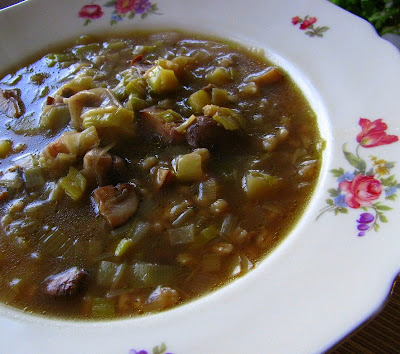 For anyone in need of a comforting, warming, calming soup to slurp, here's the recipe:

Leek, mushroom and barley soup
serves 4-6 as an appetizer, 2-4 as a main course

The white and green of 2 fat leeks, thinly sliced (about 300 grams prepared weight) 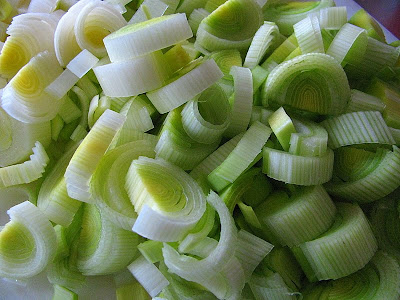 Put the leeks, garlic and butter in a large pan with the butter and sweat, covered, over low heat for about 10 minutes. By that time the leeks should be wilted and soft but not brown.
Meanwhile, soak the porcini in a cup of boiling water until very soft.
Also, heat a cast iron pan until very hot, and in it fry the chestnut mushrooms over high heat until they are brown and shrivelled up.
Add the broth to the pot with the leeks. Add the potatoes, thyme, salt and pepper, and the chestnut mushrooms when they're ready.
Lift the porcini from their soaking water (don't discard this) and chop them finely. Add them to the pot. Also add the soaking liquid (most recipes tell you to run this through a sive to get rid of the dust and grit, but I find that if you pour the liquid carefully from the cup, it's easy to leave the grit behind.)

Bring the soup to the boil. Add the barley, and simmer the soup for 20 minutes or so or until the barley is plump and tender.

Taste for salt and pepper (while this is comfort food, it does need to be seasoned properly!). Just before serving, add the balsamic vinegar.
Posted by Klary Koopmans at 12:25 pm