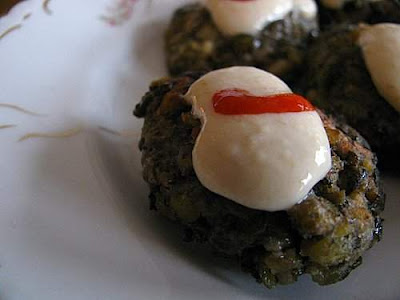 I was so, so determined to write this post in Dutch, until I realized it would mean having to give up on using two of my favorite English food words:

Dutch readers who know what fritters and patties are, and English readers with knowledge of Dutch food words: is there a Dutch equivalent? What would we use? "Koekje" and "burger" (and strictly speaking, that's not even a Dutch word) come to mind. But other than that - no. Fritter is so wonderfully descriptive - you can almost see the little heap of batter sizzling away in the pan, hot oil creating crusty bits. And patty is just cute - again, the word evokes hands lovingly patting some kind of meat or vegetable mixture into a burger-like shape.

I have faith in all languages, and it should be possible to attach a Dutch word to the little lentil fritters I made yesterday. But I can't find it.

I'm planning a dinner for this weekend. It's one of those New Friends Are Coming Over For The First Time kind of dinners. Exciting, and scary. I don't know what they like or don't like (although I do know one very important thing about them: they're vegetarians). I want to impress them, but I also want to be relaxed, and to be able to spend most of my time at the table and not in the kitchen. Fortunately, I like this kind of creative challenge and I've been mulling over possibillities for days.

One of the things that kept popping up in my head were some kind of lentil or bean fritter, to serve as an appetizer (falafel-like, with sauces and condiments, but without the bread). I remembered seeing something like it
somewhere so last night I experimented with them a bit. I don't usually 'try out' stuff for dinner parties, but to be honest, I just felt like having lentil fritters for dinner!

I coarsely pureed 1 1/2 cups of cooked green lentils Du Puy, mixed that with 1/2 cup of breadcrumbs, an egg, salt and pepper, chili flakes and cumin. The patties held their shape really well, but after frying, the verdict was they were way too dry. Flavorwise, they were good - and the dollop of tahini sauce and the drop of sriracha were perfect with it. 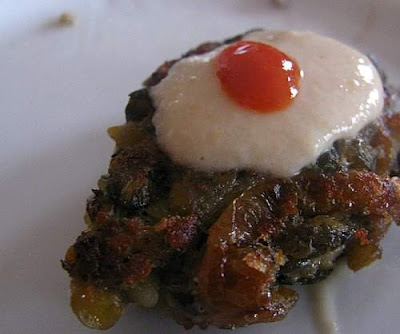 For the next batch, I added a splash of milk to the mixture to loosen it up a little, and I also added a couple of tablespoonfuls of caramelized onions I had in the fridge. These patties were much moister and I really liked the sweet onions in them. Presentation wise, they looked unfortunate (yes, like some sort of diseased nipple, I know) so I put the rest of them on a bed of watercress and drizzled tahini sauce and sriracha on top. 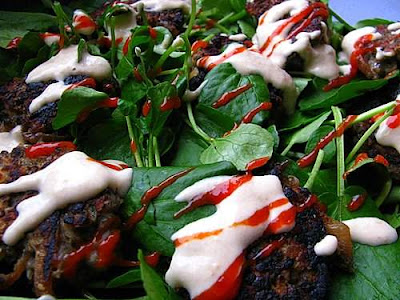 Oops, I totally forgot that we put caramelized onions in ours too. Mara actually reminded me yesterday, funny that you went in that direction as well.

And yes, they totally need the sauces, and the marinated lemon-dill cucumbers are pretty critical for adding moistness as well....

yum!! what a great idea. How about some type of goat cheese sauce, goat cheese lightened with a bit of cream and some parsley or chives all zipped up in the food processor?

They look really good! Would it be a good idea to use mango chutney instead of milk & caramalized onion (since the latter is not a usual condiment ;)

wendy, yes, goatscheese would be great with them..

gnoegnoe, yes I think you could use a nice, sweet & spicy chutney instead of the onions. You might still want to add some milk to make the batter less stiff though.