London for 14: dinner at Konstam 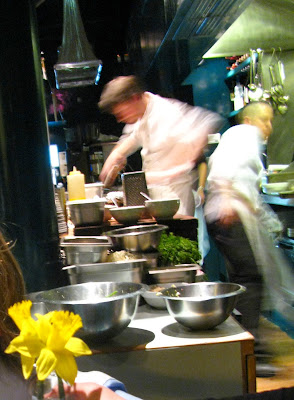 My London weekend was filled to the brim with gorgeous food and lovely restaurants. I had 2 truly great lunches on my own (more abut those later), but, after all, this was a group trip, and I had planned one dinner for all 14 of us to eat together. Arranging this wasn’t easy (especially because I only started thinking about it one week in advance), but someone on Chowhound directed me to Konstam – a place I never would have found on my own, no matter how long I’d googled. The menu looked interesting, it was within walking distance of our hotel, the owner was extremely friendly and cooperative when I called – so Konstam it was.

The room is gorgeous and very unusual, with huge, beaded light fixtures hanging from the ceiling, and turqouise floors and walls - creating an almost submarine-like atmosphere. You can see a picture of the dining room here – all my pics of the interior came out blurry. I feel it took the servers some time to warm up to us but when they did, they were great – and I know that a large group is not an easy thing to handle on a busy Saturday night! 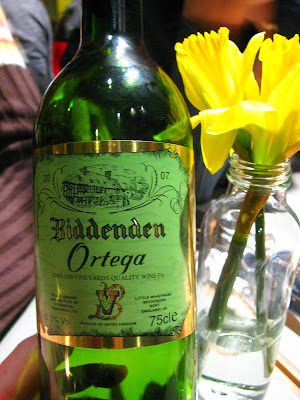 They had suggested putting us in the private dining room, but I thought that would be a bit boring, so we had 2 separate tables in the main dining room instead – which worked perfectly. With a group that size one large table doesn’t make much sense anyway, since there’s no way you’ll be able to communicate with everyone, so having 2 tables (and switching seats sometime during the evening) is a much better way to go.

Konstam’s food philosophy is interesting and unusual – from their website: "over 85 % of the produce used in the Konstam kitchen is grown or reared within the area covered by the London Underground network". This could easily turn into a gimmick, but in the hands of owner and chef Oliver Rowe, it doesn’t. When you look at the menu you see locally raised pork, chicken and lamb, seasonal vegetables like chard, kale, turnips, beetroot and parsnips. Because of the localness and seasonality, the food has a decidedly Northern European feel – lots of things like sour cream, dill and caraway, spätzle, pierogi’s and pies - but it´s not heavy or stodgy, and very far away from the blandness that´s still too often associated with British food.

We had a limited menu to choose from, which is the downside of group dining – it meant I couldn’t order the Mersey dab with nasturtium butter, or the rosehip sorbet –but really there wasn’t much to complain about the things I did eat: 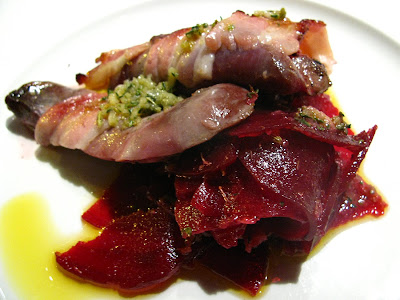 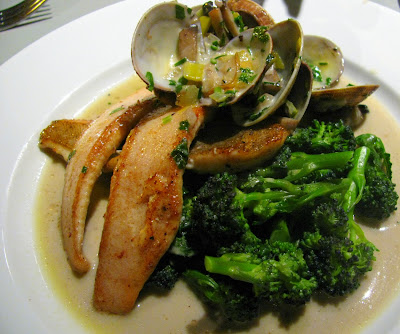 Pan-fried lemon some with mushroom clam sauce and sprouting broccoli

The pigeon was delicious – the meat was extremely rare but so mellow and tender, a great combination with the salty bacon and the sweet earthy beetroot (btw, another excellent example of how well beetroot and bacon go together). I tasted some of the house smoked mackerel and the Jerusalem artichoke soup, and they were both very good. 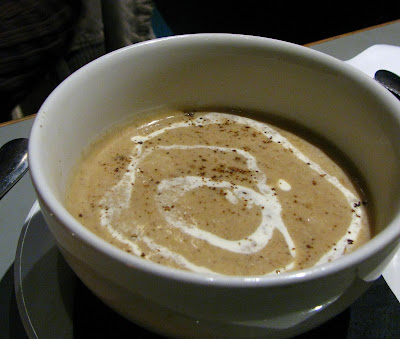 The pork was exceptional – maybe the juiciest and most flavorful pork I ever had, and the glazed turnips were also delicious – they made want to go to the market and buy turnips, which isn’t a feeling I often have. My sole was good, maybe not as exciting as the pork, but because I had had eaten such a big lunch, I was still glad I chose it – the flavors were light and fresh.

Lemon posset with gooseberries was delightful and so British, and the selection of British cheeses was the perfect way to end the meal.

As a rule, I’m not a fan of group dining – I tend to lose myself in conversations and mingling, and then obsess about not doing the food justice. When the food is really good I feel I won’t be able to appreciate it, yet it has to be good enough to be able to stand up to the literal and figurative noise of the crowd. The food at Konstam did exactly that: you get excellent produce prepared with respect and care, nothing fussy or too fancy, just great flavors and interesting flavor combinations.

They have a nice wine list, but our adventurousness led us to trying a British white, and we ended up ordering a lot of bottles of it. As I’m looking at the drinks menu online, I regret not getting the 10 year old Somerset Apple cider brandy... maybe next time? 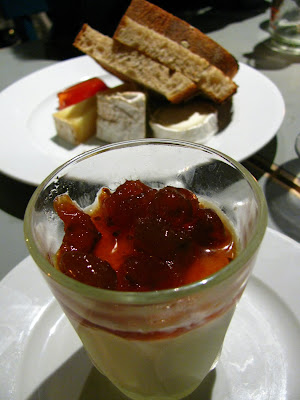