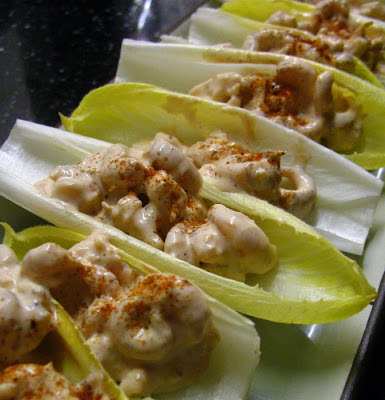 This weekend was the long overdue Dutch Dinner for my American friends who I refer to in my calendar as M&M. Here’s what was on the menu:
Little smoked eel rolls , Dutch shrimp in cocktailsauce (recipe here), hachee, brussels sprouts mash with crispy bacon, carrots with mustard and tarragon (the only not classically Dutch item in the main course, but I felt the plate needed something zingy and fresh-tasting). And for dessert: baked sweet wine custard, stewed pears (stoofperen), and madeleines. Yes, I know madeleines aren’t Dutch, but hey, I have a madeleinepan and in my mind, those cakey cookies would go perfectly with the pears and the custard. They did, and they were wonderful: fragrant with just a touch of orangeflower water, and with a moist yet light crumb. Oh and the pears were one of my best batches ever, probably because of the nice fat and juicy vanilla pod that was stewing in there for hours. 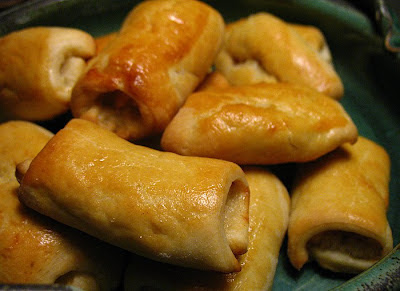 Now, about that custard.
You would think that after my maple custard debacle I would think twice about making a baked custard for guests ever again. Sadly not. It’s just that descriptions in cookbooks can lure me into fantasizing about a dish: the way an author praises a recipe, makes me think that it cannot be so hard to produce similarly glorious results, and I forget my failures of the past, again only looking ahead at future success (and the possibility of future praise).

This time the motivation wasn’t a bottle of maple syrup, but half a bottle of Monbazillac sweet wine which was lingering in the fridge. Somehow we never got around to finishing it, and I felt I needed to do something with it before it would lose its flavor. Then there was Nigella Lawson’s recipe for Baked Sauternes Custard. She is ecstatic about this (she's like that about a lot of her recipes, but with his one, even more so than usual), and she makes it sound so easy.

I learned a little lesson from last week’s over-baked custard. So this time, the oven was set to 140 C, and while Nigella says the thing has to bake for an hour, I set the timer for 30 minutes and then checked on it. It looked fine, not curdled at all, just happily steaming in its waterbath. So I set the timer for another 20 minutes. When I came back to the oven, the far right corner of the custard was puffed up like a balloon. If I ever had any doubts about where my oven’s hot spot is, now I know! The poof did collapse after I took the custard from the oven, resulting in a little curdled crater: 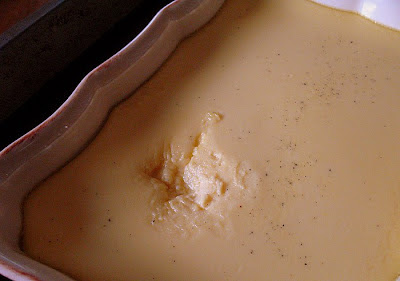 When we cut into it, it turned out the custard was not at all what Nigella had promised us. She talks about this dessert having the texture of an 18th century courtesans inner thigh. I never imagined what those would look like, but I'm guessing Nigella does not mean something like this: 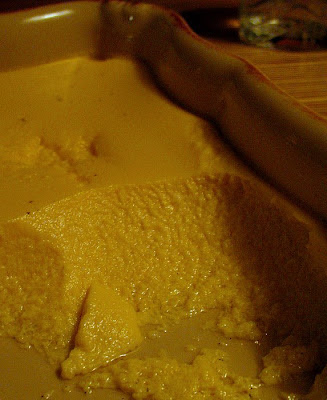 The taste was good though. Sweet and creamy with a little tang from the wine. And it was definitely an improvement after the maple custard. So should I give up? I don’t think so. We have friends coming for dinner this Friday. There will be some sort of baked custard on the menu. What female body part it will resemble, we’ll see..

Did I mention the madeleines were fabulous? Here's what they looked like - just so I can end this post with something that was a success. 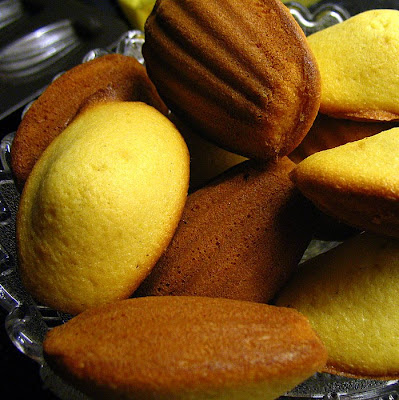 Posted by Klary Koopmans at 9:18 pm

The custard indeed looks like a 200-year old's thigh doesn't it? So Nigella was right ;-)