Meatless Week, Day 3 & 4: Something on your plate 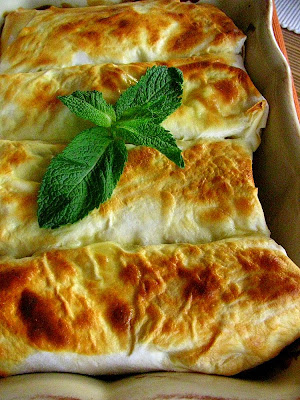 We spent Monday afternoon at a friend's house, celebrating her birthday. When we left at 6:30, we had eaten a lot (lemon meringue pie, chocolate cake, madeleines, hummus, cucumber sandwiches, cheese straws and olives) but were left with the yearning for something to be eaten from a plate, sitting down, at the table. It wasn't until I stopped by the grocery store to get 'something' for dinner, that I realized that there's nothing like an afternoon of drinking cold white wine on a sunny balcony to make you crave...

My normal standby for an evening like this would be pasta carbonara: fast, easy, delicious and satisfying. But since that was out, I could not think of anything else. We wound up eating an utterly boring salad with avocado, tomatoes and some old cornbread that I toasted in the oven. I'll spare you the pictures.

Tonight, something better and a some musings about the vegetarian dinner plate.

I always feel that one of the biggest pitfalls of the vegetarian dinner is the fact that it's so easy to wind up with a one pot meal, a dish that consists of lots of little things chopped up and tossed together. Pilafs, pasta dishes, composed salads and soups - no matter how delicious, they can be boring to eat, mouthfull after mouthfull of the same thing - especially when you're used to a steak or a chicken leg or a meatball on your plate. You want something sizeable, something to cut into, something to take little bites out of.

It does't have anything to do with flavor, just with the psychological effect of how satisfying it is to have that Piece of Something. The piece does not have to be meat. It can be a wedge of quiche or frittata, a slice of lasagna, a lentil burger.

So I tried something like that today. I passed my favorite Turkish supermarket this afternoon and bought a packet of yufka, pastry sheets similar to but a bit thicker than phyllo. And made these eggplant cheese borek.

They're based on a dish I learned to make from a Kurdish co-worker a couple of years ago. That version has nothing but eggplant, ground lamb, onion, garlic, salt and pepper in the filling. Lacking the meat, I experimented a bit with cheeses, herbs and seasonings. I love the flavor of allspice with eggplant, and the mint gives it a slightly Greek feel. You could easily substitute parsley or coriander for the mint, and use some red pepper flakes in the filling, or ground coriander seed (which is also a great match with eggplant). The egg and yoghurt topping makes the crust lovely golden brown and delightfully balanced between crispy and chewy. Do try this! 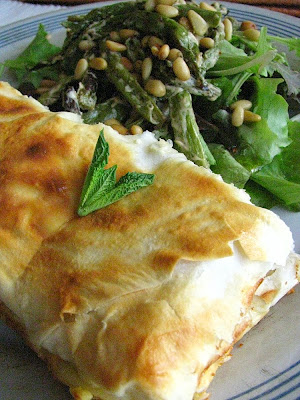 Eggplant and cheese borek
makes 4, serves 2-3 as a main course

Preheat the oven to 200 C. Prick the eggplant all over with a fork, wrap it in foil and roast it until it´s soft 8about 40 minutes). take from the oven, let cool a bit and peel.
Fry the onion and garlic in olive oil until soft. Add the allspice, salt and pepper, and the chopped up eggplant. Fry it all together for a couple of minutes. Then let cool a bit, and mix in ricotta, cheese and mint.

Separate the egg. Mix the white with 3 tablespoons of yoghurt, the cream and water. Mix the yolk with the rest of the yoghurt.

Lay out your yufka sheets. Your goal is to end up with 4 large discs of an approximately 10 inch diameter. Depending on your brand of yufka, you need to cut your sheets or put the smaller pieces yours was already cut in, together. Brush the sheets with the egg white - yoghurt mixture. This will help to glue the pieces of yufka together.

Divide the filling in 4 portions. Put a portion of filling on each 10 inch yufka circle, fold in the sides and roll it up so you end up with a thick sausage like pastry. Put the pastries (borek) in the baking dish.

When all 4 pastries are in the dish, pour the egg yolk-yoghurt mixture over the pastries and bake the whole thing for 30 minutes at 200 C. 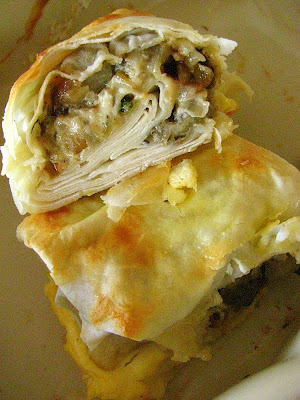 Posted by Klary Koopmans at 7:06 pm

Oh, my, that looks scrumptious! We're eggplant people, as well, and the addition of the cheese and yogurt---yes.

With the pie and cake and madeleines and cucumber sandwiches, I thought you'd been to afternoon tea, but since you didn't sit, I suppose that it was a wine/cocktail event.

And the consistency of the eggplant, the substantial heft of it with the cheese---that's quite a bit like a meaty meal.