Go ahead.. smoke your tempeh 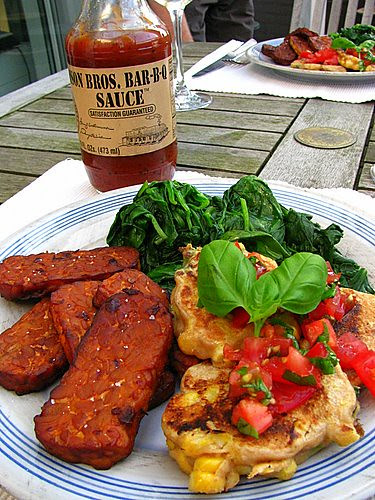 Yes, I´m sorry. I don´t why exactly, but I had the voice of Clint Eastwood in my head the whole time yesterday, as I was preparing dinner. It´s weird, because when I think of Clint, tempeh isn´t really the first thing that comes to mind. Steaks, baked potatoes and a tumbler of whisky.. yes. Fermented soy products.. no.

We´d been discussing tempeh and various ways to prepare it over on eGullet a couple of weeks ago, but it took me until this weekend to finally try that genius idea of mine: smoking my tempeh. The marinade was a tablespoon of chipotle in adobo puree, a tablespoon of maple syrup, a tablespoon of soysauce, a tablespoon of vegetable oil and a splash of water to make it a bit more runny. Slices of tempeh were marinating in this for a couple of hours, and then smoked in my little stove top smoker for 25 minutes. They tasted definitely smoky and ´cooked´ after that (and were nicely browned and considerably firmer than before the smoking). I heated them briefly on the griddle plate before serving - and on the plate they were smothered in this awesome BBQ sauce, which made it a bit hard to tell how good the smoked tempeh really was, because that sauce could make tripe taste good. 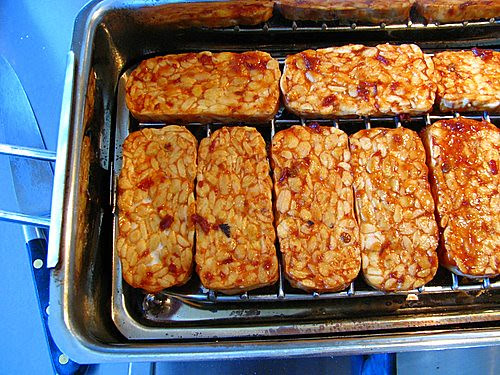 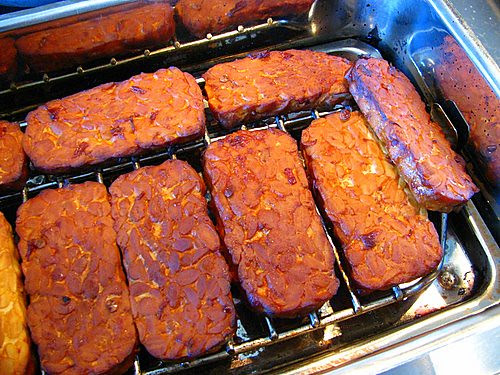 The verdict? I thought the tempeh was really really good. Smoky, spicy, meaty. I should have sliced it a bit thinner though, so the slices would have been more impregnated with smoke. Also, they would have been even better (mostly texture wise) if I had fried them in oil after smoking, but I was trying to do the Healthy Thing here, and really, I did not think the frying was absolutely neccessary. Also, next time I might try smoking it for a little longer, to see if that will give it an even more pronounced smokiness.

Dennis was not so pleased, but he says this is mainly because he associates tempeh with Asian food, and the smoky barbecue flavors were clashing with this.

Never mind, I think it was a success, and something I´ll be doing again. I can see thin slices of smoked tempeh in an omelet, or as croutons on a salad, or in a sandwich with avocado maybe. Oh, mmm... 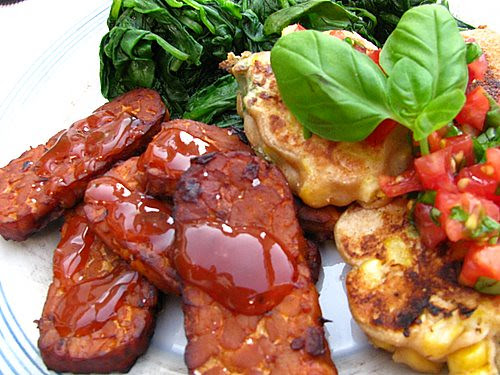 Posted by Klary Koopmans at 5:55 pm