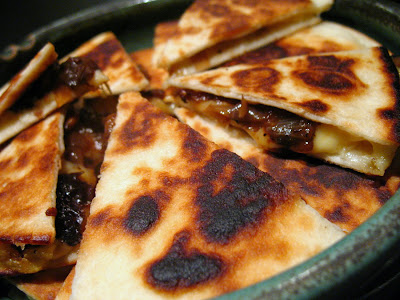 The best part about being your own boss is, well, being your own boss. And while being employed definitely has its perks (she said, still recovering from the office Christmas party where warm champagne, even warmer mulled wine, a handsome bonus and lots of co-workers showing unexpected... uhm... talents, made for an evening that was as interesting as it was fun), being the boss of your own little blog empire feels great too...

So I can say goodbeye to my readers one day and be back with a recipe the next. No one is telling me that I should be consistent, keep my promises, do the expected. Right?

I was making quesadillas the other night to go with a slightly New Mexican inspired meatball stew (basically meatballs flavored with lots of New Mexican chile powder). I was going to make just regular quesadillas (cheese only), but then I saw a packet of prunes lying on the counter (sometimes being too lazy to stash things away is a good thing. It can inspire you.) and I thought of this, and then I made something that wasn´t at all the same, but it was pretty terrific (I had to go back to the kitchen 3 times to make more quesadillas for our guest), and now I am sharing it with you.

Corn tortilla´s would have been even better, but my freezer is too full of other stuff right now to have a supply. And even with supermarket flour tortilla´s (I used the Albert Heijn brand called ´gordita´s´) they´re very, very good. 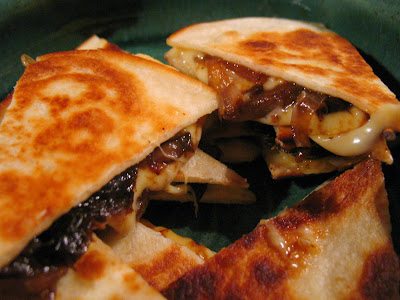 Fry the shallots, mushrooms and garlic in the olive oil for a couple of minutes. Add the prunes, vinegar, sugar, salt, pepper, thyme, nutmeg and water. Simmer, uncovered, over low heat until you have a thick, pasty sauce. Add some more water if it becomes too dry, but the end result should be a fairly dry mixture. Mine cooked for about 45 minutes. 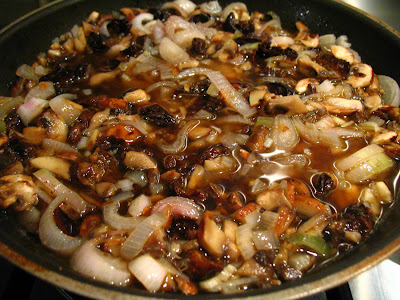 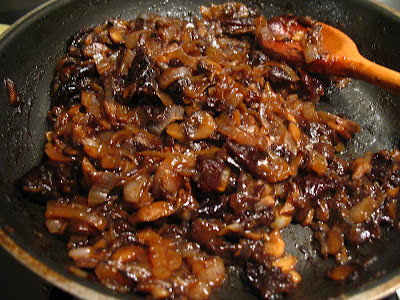 Put some cheese on one flour tortilla. I used semi mature Gouda, but any cheese with good melting quality will work. Spread some of the prune stuff on the cheese and cover with another tortilla. Heat some fat (lard, olive oil, walnut oil) in a small frying pan put the tortilla in and drizzle with some more fat. Cook for a minute on moderate heat, flip over, cook some more until the tortilla´s are golden and the cheese is oozing.

Cut into triangles and serve.
Posted by Klary Koopmans at 11:02 am

Looks highly edible.
I just asked my mom to pick up some prunes at the store so I could make that confit...

And keep in mind that I still owe you a pack of corn tortillas and we have a WONDERFUL WHOLE STANDALONE FREEZER full of them at the moment...

hehe. Someone must have HEARD YOU SCREAMING all the way from Phoenix, cause I just received some corn tortillas....