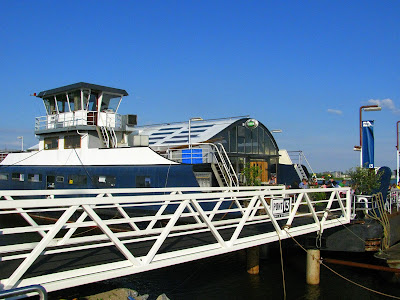 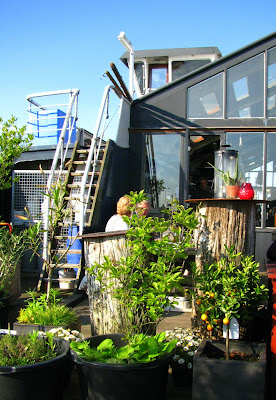 One of the many dinners out we had the past couple of weeks was at Pont 13. Within one week, this place had been recommended to me by several people about whose culinary standards I really have no clue, but who all commented that it was such a magical place at such a fantastic location, with such great atmosphere. So on one of the warm and sunny days of the Pentecost weekend, we headed out to the remote spot where this former ferry-transformed-to-restaurant is located. It´s not that remote, really, at least not to us who live in the western part of the city - and I would guess it´s about a 20 minute bikeride from Central Station. But that bikeride leads to what feels like the middle of nowhere: an industrial area with no housing or stores or other restaurants, just huge warehouses and boats. 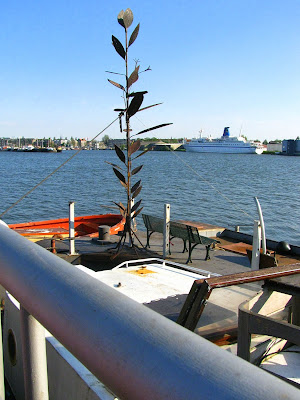 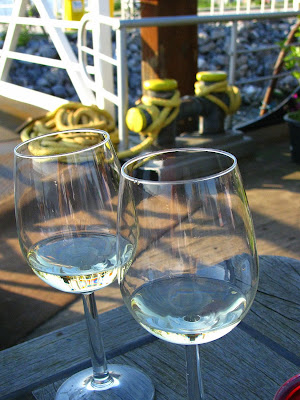 We were seated outside with a view of the Silodam, ordered one of our favorite wines (a German Gewurztraminer), a plate of oysters to start, and were happy. Even happier when our main courses arrived: everything fresh and vibrant tasting, carefully seasoned, prepared with attention to detail. Dennis had roast poussin with roast vegetables (which were laced with fresh peas), I had the fish of the day which was fried lemon sole with a crushed potato salad and tarragon sauce. And the fries.. these were easily some of the very best fries we´d ever eaten in a restaurant. Served with a tangy mayonaise, crispy on the outside and creamy fluffy on the inside.. oh my. I would go back just for the fries. 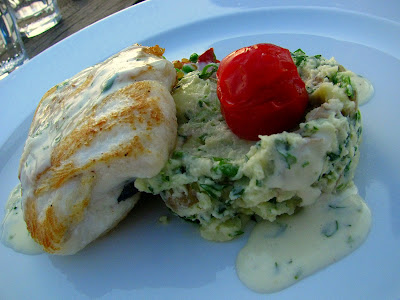 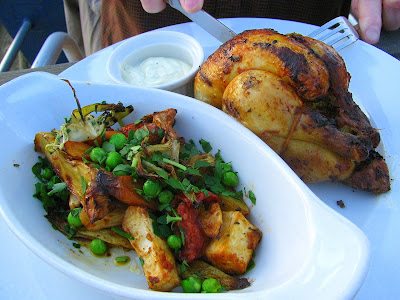 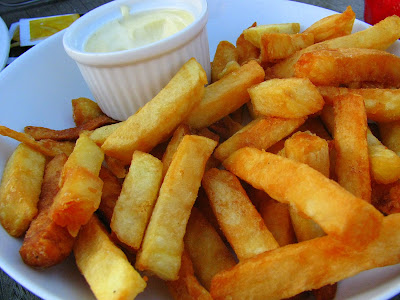 Sitting outside is lovely, but indoors it´s pretty cool too - a large room with lots of nautical features, a huge woodburning stove, and a rabbit that lives a quiet life in a large cage that´s guarded by a St. Bernard. And seeing the sun set behind the boats is indeed magical - it makes you forget you´re in Amsterdam, and makes you feel like you´re on vacation. Which is something we all should feel more often. So get yourself to Pont 13 for a nautical mini break with some great food to boot! 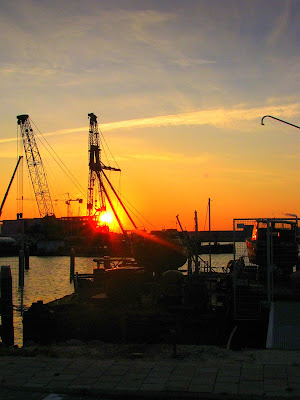 Posted by Klary Koopmans at 6:31 pm

I went to Pont 13 a few years ago and somehow was underwhelmed. I don't remember anything in particular being bad. Maybe the dishes were somewhat boring. Or maybe the food just didn't live up to the fantastic location and the numerous recommendations.

Think I'll have to try again on a sunny day!

Have you been to http://www.wilhelmina-dok.nl/ on the other side of the IJ?

well, you know, I wouldn´t say this was overhwelmingly good food.. it was just really well done, unpretentious and ´right´. It often seems like that´s hard enough to find in Amsterdam!
I´ve been to Wilhelminadok, for lunch, often.. great location, too.